INSTRUCTION: ANSWER QUESTION 1 AND ANY OTHER 3

(1ai-1av)
Please mark all those places in your map just like u see in the map. I marked PTS, CL, GS, ARS, CF 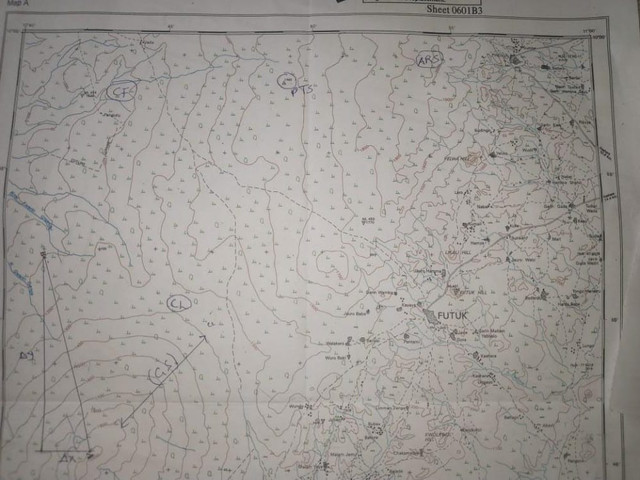 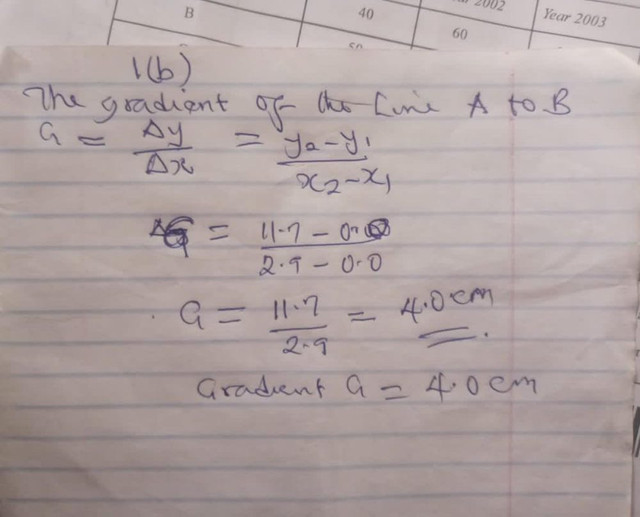 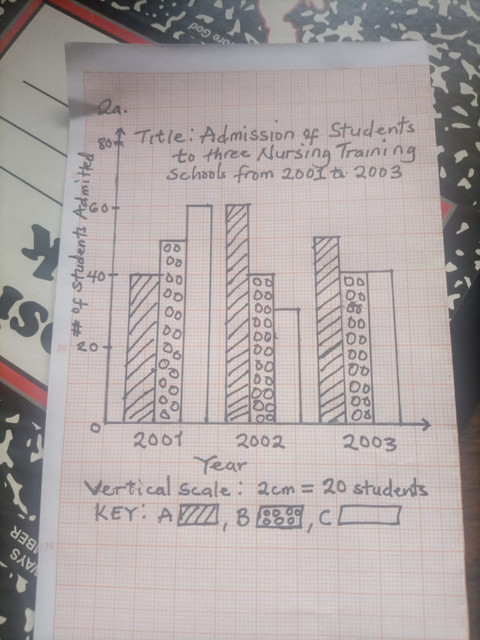 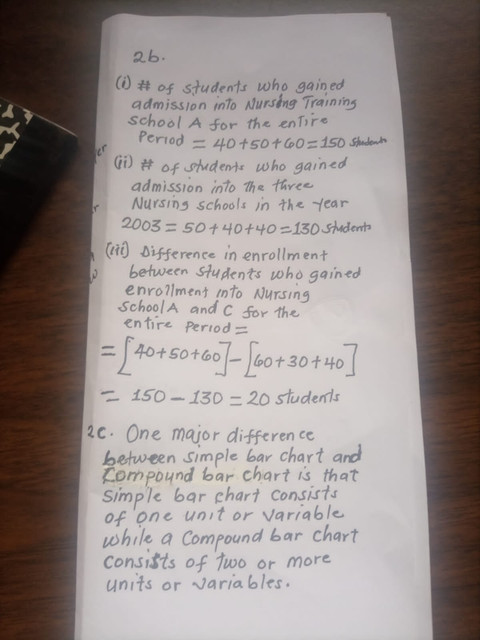 (2c) (i) Simple Bar Chart is easy to draw and its fairly accurate. WHILE Compound Bar Chart are used to compare statistical data concerned with two different units showing how one is affected by the other. 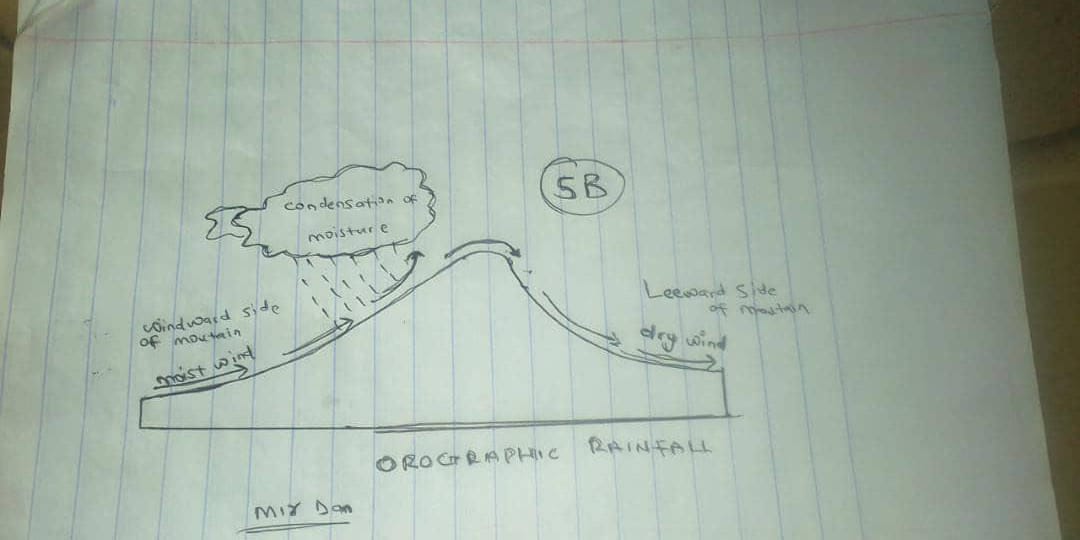 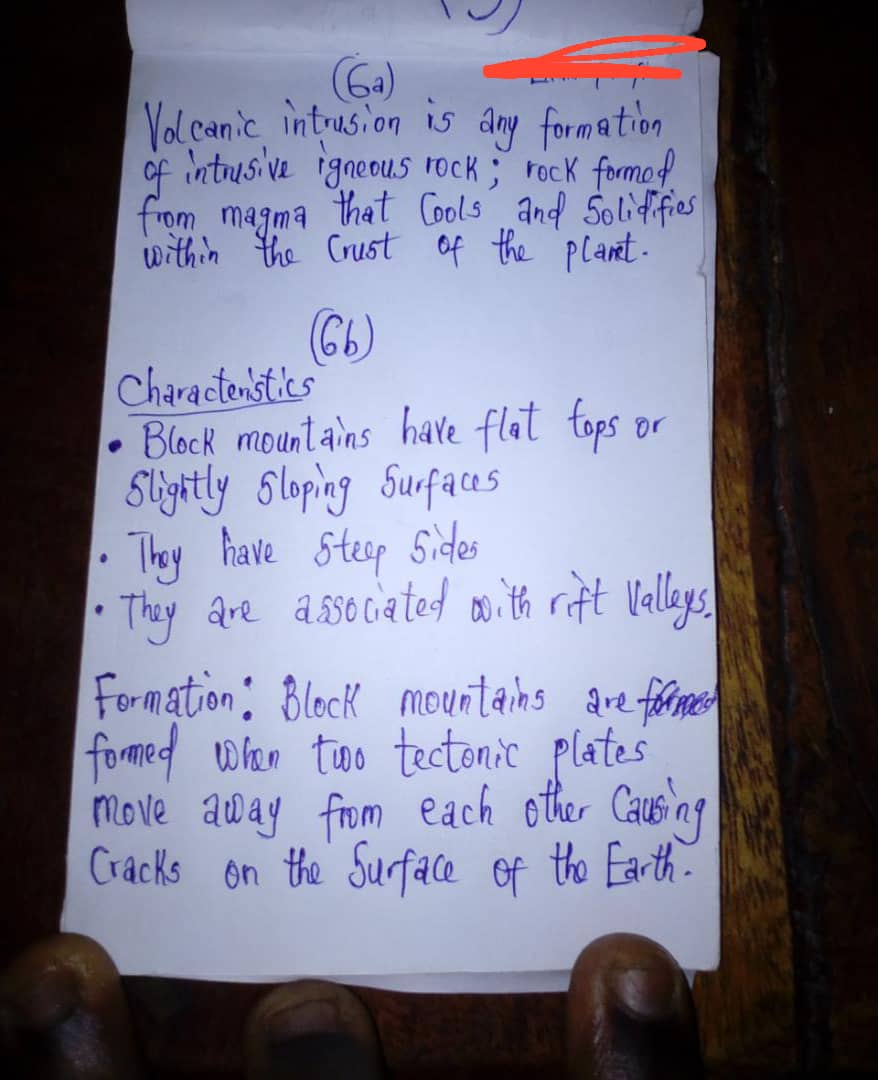 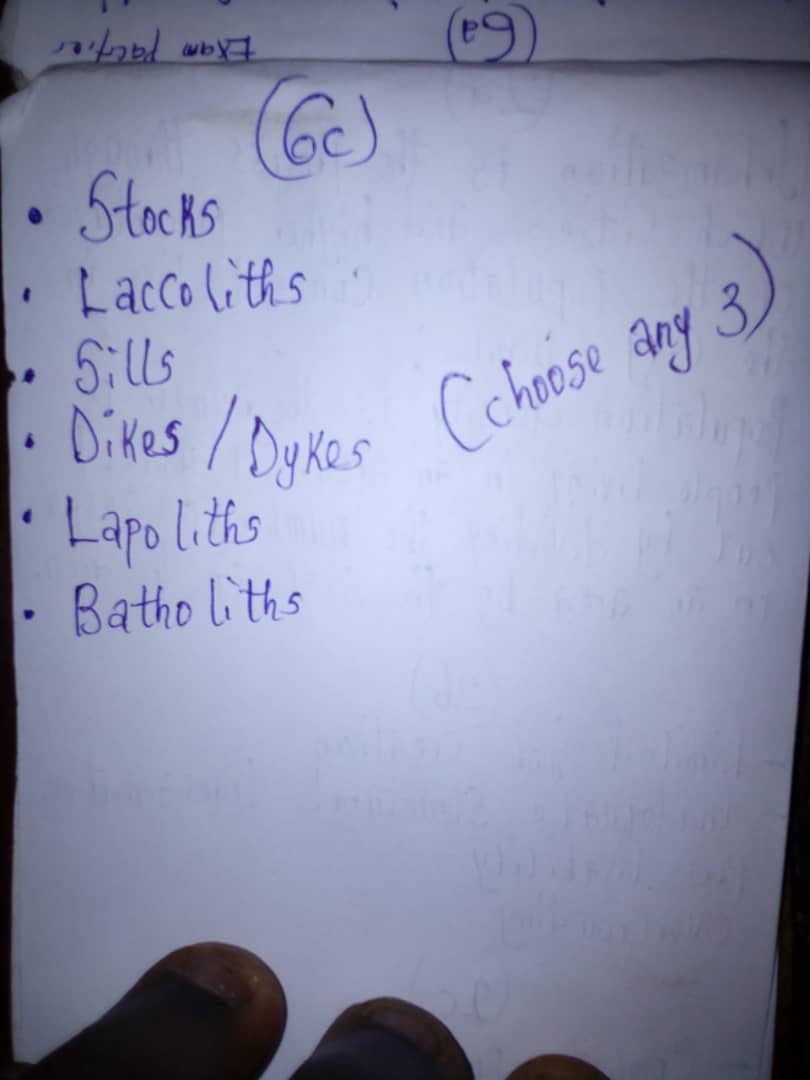 (7bi) Exfoliation is a process in which large flat or curved sheets of rock fracture and are detached from the outcrop due to pressure release: As erosion removes the overburden from a rock that formed at high pressure deep in the Earth´s crust, it allows the rock to expand, thus resulting in cracks and fractures along sheet …

(7bii) Frost action is the repeated cycle of ice formation and ice melt in the pore spaces and fractures of rocks causing disintegration of the rock. When water in rock pores freezes, its volume increases by about 10%. This can create a significant amount of pressure on rocks.

(8b) i. Biotic components: are the living things that have a direct or indirect influence on other organisms in an environment. For example plants, animals, and microorganisms and their waste materials.

ii. Abiotic components: This includes all chemical and physical elements i.e. non-living components. Abiotic components can vary from region to region, from one ecosystem to another. They mainly take up the role of life supporter. They determine and restrict the population growth, number, and diversity of biotic factors in an ecosystem. Hence, they are called limiting factors.

(1c)
(PICK ANY FOUR)
(i)Deliberate effort should be made towards the expansion of the Raul network ,inorder to generate growth in the economy. Effort should be geared towards improvement of the efficiency of the rail network

(ii) Government should make capital available to railway authorities to enhance efficiency. Training and retraining of personnel should be undertaken from time to time

(iv)Adoption of standard gauges is very important , so as to enhance operational efficiency.Also There should be Faster engines and coaches to facilitate east and quick movement.

(v)There should be embarkment to check steep gradients, uniform gauges should be adopted, double tracks should be constructed and There should also be improved communication system.

(2a)
Urbanization means a change in the functions of a settlement from a rural character to an urban character. While population density is defined as the number of persons per unit area of land. An urbanized town may not be overpopulated.

(2b)
(i)INCREASED DEMAND FOR GOODS AND SERVICES: As a result of high influence of people in to urban areas, there will be increased demand for goods and services to satisfy their wants.
(ii)Social amenities like pipe-borne water, electricity, will be in high demand when people migrate to urban areas.
(iii)Social vices like arm robbery, higher assassination, car snatching will be on the increase, partly due to unemployment and other factors in urban centres.
(iv)High concentration of people in urban centres tends to lead to land fragmentation which reduces the size of farmlands and leads to low yields.

(2c)
(i)Price control measures need to be put in place to cushion the effect of high demand for goods and services.
(ii)Provision of social amenities must improve.
(iii)Security must improve.
(iv)The government must see to it that modern framing techniques are introduced whilst developing new towns.

(i) A small labour force made up of mainly the family members is employed
(ii) Small quantities of articles are produced
(iii)Less capital intensive
(iv)Irregular hours of work
(v) Prices of products are negotiable as it uses simple tools
(vi)Irregular income and uses local raw materials mainly.

(3b)
(PICK ANY THREE)
(i) The Local Craft industries are often affected by lack of raw materials which hinders the production.
(ii) Poor patronage from the indigenes as a result of poor finishing and low purchasing power.
(iii) Lack of modern equipment to reduce the physical human labour in order to increase production.
(iv) Problem of transportation to bring the finished products from where that are produced in the interior to the markets in the urban centers.

(iii)Colonial ties: The inclination of some developing countries to their colonial masters has helped to increase the volume of trade between the nations.

(vi)Preference for imported goods: Developing countries like Nigeria has preference for goods produced by advanced countries; hence, the high volume of trades 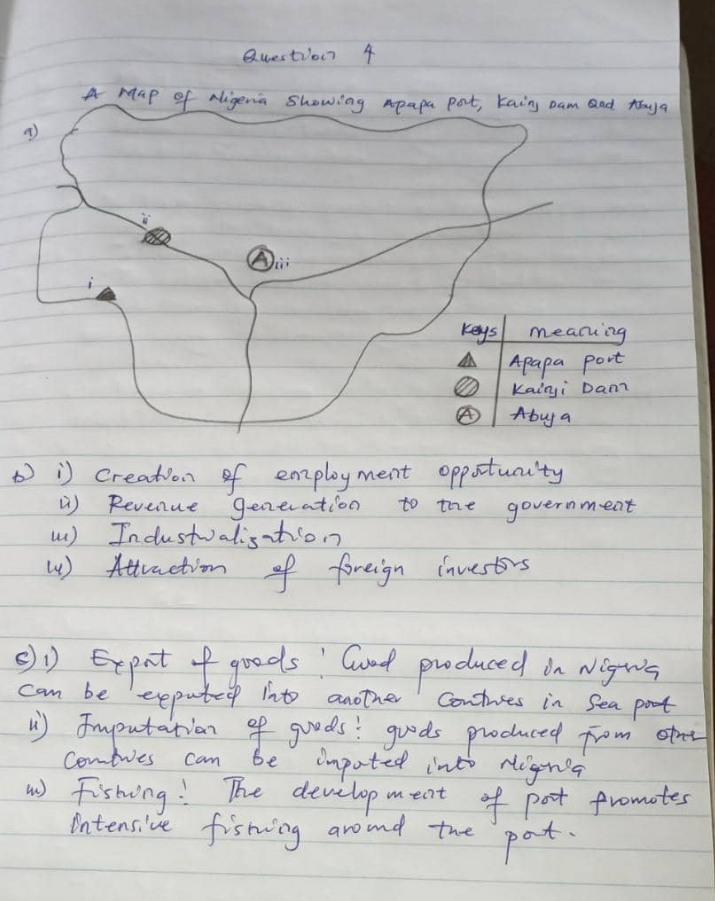 (4c)
(i) Export of Goods: Goods produced in Nigeria are exported to other countries through seaports.
(ii) Import of Goods: Goods purchased from other countries are also brought into the country through the seaports, thereby, promoting international trade.
(iii) Revenue to the Government: Tariffs and demurrage from imported goods are sources of revenue to the government.
(iv) Tourism: Seaports are also centers of tourist attraction.

(5b)
(PICK ANY FIVE)
(i)It is very common in rural areas with abundant farmlands.
(ii) It involves small holdings of farmlands.
(iii) Food crops like yam, cassava and maize are grown.
(iv)Farmlands are left to fallow after one or two years of cultivation.
(v) A farmer returns to the farmland after a fallow period of 2-5 years.
(vi) It uses slash or burn method for land preparations.
(vii) It does not involve the cultivation of cash crops like cocoa, rubber and oil palm.
(viii)Bush fallowing is practised where population is very low.
(ix) Produce is usually very low and there is little or none for sale.

(5c)
(PICK ANY FOUR)
(i) It leads to wastage of land which could have been used by allowing it to lie fallow
(ii) It leads to land fragmentation due to increase in population
(iii)It allows for cultivation of only one seasonal crops like maize,rice and millet
(iv) It does not lead to mechanisation of farms i.e it does not allow for large scale mechanised farming
(v)It results in poor yield resulting from shorter fallow period as population
(vi)It leads to soil erosion when soil is exhausted and it destroys valuable forest resources like timber.

(6b)
(i) Inadequate Housing: High population Concentration leads to poor accommodation as houses available is not enough for the large population in Lagos.
(ii) Pressure On Social Amenities: Social Amenities like Pipe-borne water and electricity are usually over-stretched by the influx of area in Lagos.
(iii) Insufficient Food: As a result of high influx of people in Lagos there will not be sufficient food or water for the high population there. This leads to food or water shortage.
(iv) Traffic Congestion: Many People travel on the road at the same time and since they are usually many, there will be traffic congestion most of the time.

(6c)
(i) Provision of Social Amenities.
(ii) Increase in Food Supply.
(iii) Construction Of More Roads to avoid traffic congestion.
(iv) Construction of More Houses should be Made.